Christmas of 1929 was a snowy season in the nation’s capital. President Herbert Hoover and First Lady Lou Hoover planned to celebrate the holidays without their family, including their grandchildren Peggy Ann and Peter who lived in California. The grandchildren were Herbert and Lou’s pride and joy, and Mrs. Hoover shopped around town at the “five and dime stores” to buy gifts for them despite their absence from the White House.1

President Hoover continued the tradition of lighting the National Christmas Tree, started by President Coolidge in 1923. This was the first time the tree was decorated with both lights and ornaments.2 Hoover lit the tree on Christmas Eve as the Marine Band, accompanied by choir students from local junior high schools, performed “O, Come All Ye Faithful.”3 Boy Scouts and Girl Scouts were also present at the ceremony, gifting Christmas flowers to the First Lady. White House festivities were in full swing as the Hoovers hosted a Christmas Eve party for Cabinet members and their children.4 During the celebration a fire broke out in the West Wing, which was quickly destroyed despite the efforts of local firefighters. Mrs. Hoover remained poised throughout the conflagration and entertained the guests as they safely exited the White House.5

The holidays ended with the president hosting the New Year’s Reception at the White House. He greeted over 6,300 guests from the public.6

As the 1930 holiday season approached, anticipation grew for the arrival of the Hoovers’ grandchildren.7 Seasonal festivities centered on the grandchildren, much to their grandparents’ delight. Peggy and Peter were thrilled by their first snowball fight in Rock Creek Park.8 Santa Claus paid a visit to Peggy and Peter on Christmas morning in the White House.9 After participating with his wife and family in a holiday service and sermon at the Washington Cathedral, President Hoover again hosted the Cabinet and their families at the White House.10

Besides entertaining her grandchildren, Mrs. Hoover had holiday obligations for the community of Washington. She distributed food and other supplies through the Salvation Army to less fortunate city residents.11 She also completed her holiday shopping at thrift shops which supported local charities.

The Hoovers were privileged to have Peggy and Peter in town for Christmas celebrations again during the holiday season of 1931. The Hoover grandchildren hosted their own Christmas party at the White House. They invited 200 friends who were asked to bring gifts to donate to children in need.12 Sixteen boxes of toys were donated to Morgantown, West Virginia, by the American Friends Service Society.13 Peggy and Peter’s kindness followed in the footsteps of their grandma who inspired their actions to give to those in need.

President Hoover again lit the National Christmas Tree in 1931 with his family nearby. The Hoovers concluded their holiday celebrations with a dance in honor of Allan Hoover, their younger son; it was common in Washington social circles to present grown children as coming of age into society during the holidays. President and Mrs. Hoover attended and entertained at these parties and dances, including the ones they gave for Allan on his breaks from his studies at Harvard Business School.

The 1932 holiday season was gloomy, with the Great Depression in full swing and President Hoover having lost his bid for reelection. Peggy and Peter also did not plan to visit, further stifling the usual holiday cheer.

To boost morale and holiday spirits, President Hoover and Commander Louis A. Johnson of the American Legion extended warm wishes to World War I veterans.14 Mrs. Hoover gracefully provided for impoverished local residents by handing out baskets of food at the Salvation Army and Central Union Mission.

After engaging in these charitable activities the Hoovers escaped the despair of the lost election by spending the season away from Washington, along the coasts of Georgia and Florida. They boarded a Department of Commerce boat, the Sequoia, for a sea cruise and fishing trip that would last through the holidays. Their early departure from Washington led to Vice President Charles Curtis overseeing the lighting of the National Christmas Tree on Christmas Eve.

Though Hoover’s administration ended in melancholy, his tenure began with joyful holiday celebrations in the White House. The First Family enjoyed spending time with veterans and the less fortunate. Nothing, however, made President and Mrs. Hoover happier than spending their time with Peter and Peggy Ann. Among the most trying times that the nation would ever endure, the presence of the Hoover grandchildren at the White House spread joy and the promise of hope throughout the nation’s capital.

Next The Outlier: Jimmy Carter and the… 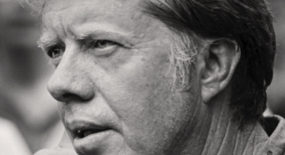