Mac Griswold is a cultural landscape historian and writer. She is the author of Washington's Gardens at Mount Vernon: Landscape of the Inner Man, Pleasures of the Garden: Images from the Metropolitan Museum of Art, with Eleanor Weller The Golden Age of American Gardens: Proud Owners, Private Estates 1890-1940, and The Manor: Three Centuries at a Slave Plantation on Long Island. She is presently at work on a comprehensive biography, forthcoming in 2021, of Bunny Mellon, who designed the Rose Garden at the White House for President Kennedy.

Scott H. Harris became Executive Director of University of Mary Washington Museums in 2018 after serving as Director of the James Monroe Museum. He has also worked at the New Market Battlefield State Historical Park, The Manassas Museum, the John Marshall House, and the Colonial Williamsburg Foundation. Scott has a BA from the University of Mary Washington and an MA from the College of William and Mary. Scott has written for White House History Quarterly, Augusta Historical Bulletin, Civil War Traveler, and the Dictionary of Virginia Biography, amongst others.

For over 50 years, Joel M. Kemelhor has been a writer/producer for "It's Academic," the longest-running quiz program in television history. Now the Contributing Editor, he continues to provide and review questions for the show, whose contestants are all secondary school students. A native Washingtonian, he is a graduate of Trinity College in Hartford, Connecticut.

Rebecca Boggs Roberts has been many things including, but not limited to, journalist, producer, tour guide, forensic anthropologist, event planner, political consultant, jazz singer, and radio talk show host. Currently, she is Curator of Programming for Planet Word, a museum set to open in 2020. She looks forward to creating a new institution that will become part of the intellectual and cultural life of our capitol city. Roberts lives in Washington, D.C. with her family.

Lydia Tederick is curator of the White House, where she has worked since 1979 when she started as an intern while a graduate student in art history and museum studies at the George Washington University. Lydia has a special interest in the fine arts collection and photographic images of the White House and has contributed to each edition of Art in the White House: A Nation’s Pride. She has also written many articles for White House History Quarterly.

Bruce M. White is a photographer of art and historic architecture. Formerly a staff photographer at Sotheby’s and The Metropolitan Museum of Art, Bruce is author of At Home in the Presidents Neighborhood: A Photographic Tour and is the principle photographer for many White House Historical Association publications. Other notable publications include, with co-author James Goode, Capital Houses, with Pierre Terjanian, The Last Knight - The Art, Armor and Ambition of Maximilian I, and Majolica Mania, with Susan Weber. 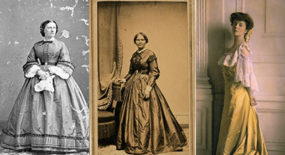