As part of her duties as first lady, Mrs. Coolidge met with veterans of the Great War and other patients at nearby Walter Reed Army Medical Center. On December 4, 1923, she visited the medical center to view an exhibition of veteran-made objects for sale.1That Christmas, President Calvin Coolidge and first lady, as well as their sons John and Calvin Jr., spent the holiday visiting with veterans at Walter Reed. The first family and assembled veterans watched a motion picture on the life of Abraham Lincoln, but Mrs. Coolidge spent much of her time conversing with patients.2 Mrs. Coolidge’s visits would continue. As a further sign of symbolic support, she wore the uniform of a Red Cross nurse during a November 1927 visit.3 In addition to visits, Mrs. Coolidge also participated in citywide fundraising efforts for the hospital.4

In the 1920s, “Forget-Me-Not” flower lapel pins symbolized American remembrance and commemoration of the war’s casualties, including survivors still recuperating from their wartime experiences.5 On Thursday, October 23, 1924, Leo B. Clark, a recovering veteran, was received at the White House where he presented Mrs. Coolidge with a pin to be worn on “Forget-Me-Not” Day, November 8. Appearing in a Washington, D.C. newspaper photo spread the next day, this public endorsement by Mrs. Coolidge demonstrated her awareness of the need to recognize the war’s survivors.6

Spring “garden parties” at the White House provided a stage for the first family to show their support for wounded veterans.7 These events, beginning shortly after the end of World War I, invited disabled veterans from hospitals to the White House. They met the president and first lady on the South Lawn while refreshments were served to hundreds of guests.

At a June 3, 1926 garden party, the United States Marine Band played martial music that reportedly “kept the soldiers humming old war songs.” Pink roses from the White House gardens adorned the tables. Grace Coolidge, accompanied on this day by her dogs Rob Roy and Prudence Prim, cheerfully greeted the veterans, most of them dressed in civilian clothes. According to one account of the day’s festivities, “Mrs. Coolidge put all of her delightful personality in the entertainment of her guests . . . the First Lady of the Land was at her best.”8

Mrs. Coolidge’s civic engagement continued after her tenure as first lady. During World War II, while living in Northampton, Massachusetts, she assisted in the production of surgical dressing for the Red Cross, supervised civilian defense efforts, and lent a hand in organizing gift drives to soldiers serving far from home.9 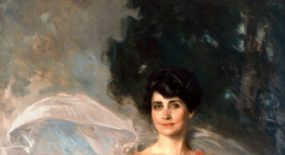