Mr. Smith’s first major book, Thomas E. Dewey and His Times, was a finalist for the 1983 Pulitzer Prize. He has also written An Uncommon Man: The Triumph of Herbert Hoover (1984), and The Harvard Century: The Making of a University to a Nation (1986). His Patriarch: George Washington and the New American Nation (1993) was a Main Selection of the Book of the Month Club, while his 1997 biography, The Colonel: The Life and Legend of Robert R. McCormick, described by Hilton Kramer as “the best book ever written about the press,” received the prestigious Goldsmith Prize awarded by Harvard’s John F. Kennedy School. In October, 2014 Random House published Mr. Smith’s biography On His Own Terms: A Life of Nelson Rockefeller, fourteen years in the making, and based on thousands of pages of newly available documents, as well as more than 200 interviews. The result has been called definitive by publications as diverse as The New Yorker and National Review.

At each of the libraries he contributed to significantly higher public visitation through major temporary exhibits, imaginative public programs, and educational outreach efforts. In addition to expanding and renovating the Hoover Library, Mr. Smith overhauled the permanent exhibitions at Reagan and Ford. In 1990 he organized the Eisenhower Centennial on behalf of the National Archives. In 2001 Mr. Smith became director of the Robert J. Dole Institute of Politics at the University of Kansas, where he supervised construction of the Institute’s landmark home and launched several high profile programs.

In October, 2003 he was appointed Founding Director of the Abraham Lincoln Presidential Library and Museum in Springfield, Illinois. In two and a half years he turned around the troubled project, which has since received international praise for its innovative approach to the Lincoln story. Beginning in 2006 Mr. Smith was a Scholar in Residence at George Mason University in suburban Washington, D.C., where for seven years he taught courses in the American presidency for both undergraduate and graduate students. During the same period he conducted oral history projects for the White House Historical Association, the Dole Institute and the Gerald R. Ford Foundation.

In January, 2007 millions of television viewers saw him deliver the final eulogy at President Ford’s funeral in Grand Rapids, Michigan: in July, 2010 he honored Mrs. Ford’s request to do the same for her. Mr. Smith was instrumental in designing a new and highly acclaimed museum and Education Center at historic Ford’s Theater in Washington. More recently he has advised planners of the George W. Bush Presidential Library in Dallas, and the George C. Marshall Home in Leesburg, Virginia. A frequent contributor to such publications as Time, Life, and the New York Times, he has also been a regular guest on the PBS NewsHour, and on C-SPAN, where he served as the network’s in-house historian from 2006-2014. In this capacity he organized a 2007 series spotlighting little known holdings of the nation’s presidential libraries; as well as The Contenders, a fourteen week series examining presidential also-rans whose historical contributions transcended their political ambitions; and a highly popular series recognizing America’s First Ladies, airing in 2013-14.

Mr. Smith is currently researching a comprehensive biography of Gerald R. Ford, tentatively scheduled for publication in 2020. He remains a much sought after speaker and commentator on historical and political subjects. “There is no excuse for a dull book, a dull museum, or a dull life,” says Mr. Smith, “especially when dealing with history — the most fascinating subject I know.” 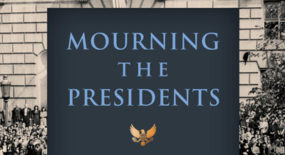