Lucy Webb Hayes, wife of President Rutherford B. Hayes, made one of the most dramatic policy changes in the history of White House entertaining — she banned all alcoholic beverages from the building. The decision earned her praise from some corners, derision from others, and lasting nicknames like “Lemonade Lucy.” For better or worse, this story has become a major part of Mrs. Hayes’ legacy. But the temperance movement, and Lucy Hayes’ involvement in it, was surprisingly complex.

Lucy Webb Hayes was born and raised in Ohio. She lost her father when she was only two years old. Her grandfather, Isaac Cook, became a major influence in her life after the death of her father. Cook was a life-long adherent of the temperance movement, which preached the evils of alcohol and the morality of abstaining from it, and he shaped young Lucy’s views.1 She became a staunch opponent of alcohol in any form. Lucy was also unusually well-educated for a young woman in the mid-nineteenth century, graduating from the Wesleyan Female College in Cincinnati at the age of 18.2 Several years later, she married Rutherford B. Hayes, an up-and-coming young lawyer from Cincinnati.

By the time her husband became president, Lucy’s opinions on alcohol consumption were well known, and Americans on both sides of the temperance debate watched to see whether the beverages served at the White House would reflect the first lady’s views. During the first major social event of the Hayes administration, a dinner in honor of the Grand Duke Alexis of Russia, the wine flowed as it always had. This decision attracted more attention than they expected. Mrs. Hayes was uncomfortable continuing to serve alcohol, and while the president did not mind an occasional drink, he saw political possibilities in solidifying the support of temperance advocates. They declared that from then on, no alcohol of any kind would be served in the White House.3 “I have young sons who have never tasted liquor,” Mrs. Hayes said. “They shall not receive from my hand, or with the sanction that its use in the family would give, the first taste of what might prove their ruin. What I wish for my own sons I must do for the sons of other mothers.”4 The temperance movement as a whole emphasized how women could set a moral example for their families, so it made sense that the first lady should serve as a model for the whole country.

Temperance organizations like the Women’s Christian Temperance Union (WCTU) celebrated this pronouncement, which the public credited entirely to Mrs. Hayes, and embraced her as a figurehead for their cause. Frances Willard, the president of the WCTU, praised the “nerve and steadfastness of purpose” required to carry out the White House alcohol ban. “By the example of such leaders temperance will become the fashion,” Willard boasted.5 The first lady’s example certainly took off within the movement, and “Lucy Hayes tea parties” became fashionable within temperance circles.6

Temperance organizations were not just social groups that opposed drinking. They were large and politically powerful activist organizations, run almost entirely by women. Men’s temperance groups existed, but were usually branded as “Sons of Temperance,” maintaining the matriarchal language of the movement. Many temperance groups also advocated for other social causes by linking them to the evils of alcohol. Women wanted to own property so that they could keep an irresponsible husband from drinking away the family’s entire living. They wanted easier access to divorce in order to leave those drunken husbands, especially if alcohol led them to be abusive. They wanted more employment opportunities so they never had to rely on a drunkard husband or father for support. Campaigning against alcohol was, in many ways, the easiest and most socially acceptable way for women to campaign for more rights and greater opportunity. Eventually, they decided that the best way to achieve these aims would be through the vote. As Eric Burns argues in The Spirits of America, “If there had been no temperance movement in the United States, the campaign for suffrage…almost surely would have been delayed, perhaps by a matter of decades, and it might not have been accepted so equably.”7 While pro-suffrage views were hardly universal in temperance circles, and there is no concrete evidence that Lucy Hayes herself ever supported the more radical aspects of the temperance platform or even formally joined the WCTU, her White House alcohol ban certainly made her a celebrity within the movement.8

Of course, not everyone responded to the ban so positively. Politicians and reporters, accustomed to the availability of alcohol at White House functions, complained bitterly.9 While one newspaper described Mrs. Hayes’ success in her “temperance crusade among the diplomatic corps, whose members she compelled to astonish their stomachs with cold water for the first time in their lives,” other accounts suggest that they simply worked around her ban.10 A White House steward supposedly concocted something he called “Roman punch,” a mix of egg whites, sugar, lemon juice, and rum. He either slipped glasses to guests without letting the first lady know what was inside or froze it and hid the cubes in the oranges that were provided for dessert.11 A more malicious opponent even sent a rum-soaked cake to the White House, which the first family served to their delighted guests unawares.12 Overall though, public opinion seems to have generally aligned with the view, expressed in one Washington Post editorial, that the first lady was “a woman of infinite excellence of character, if a trifle fanatical on the subject of temperance.”13

One of the sharpest responses to First Lady Lucy Hayes’ temperance actions came from those who felt she was not dedicated enough in her adherence to the movement. While on a trip to Philadelphia with her husband in 1878, she supposedly failed to protest against the claret punch that was served. “It is a great mistake to suppose I desire to dictate my views to others in this matter of the use of wine and such drinks,” she was reported to have said. “I do not use them myself or in my family, but I have no thought of shunning those who think and act differently. It is a mistake to think that I should want to be so dictatorial. I want people to enjoy themselves in the manner that is most pleasing to them.”14

The incident, and Mrs. Hayes’ supposed remarks, sparked an immediate uproar. The “Mrs. R. B. Hayes Temperance Society,” a Washington-based group that had previously embraced the first lady as a figurehead, rejected her as a “fraud” and disavowed their name.15 Other temperance groups, however, quickly defended Mrs. Hayes. They repudiated the Mrs. R. B. Hayes Temperance Society as “shallow-brained, God-forsaken slanderers” and insisted that the remarks attributed to the first lady were false and her temperance bona fides above reproach.16 Despite this heated rhetoric, the incident seems to have blown over relatively quickly, and Mrs. Hayes was soon the darling of the temperance movement once more. By the time the Hayes family was getting ready to leave the White House, the WCTU had taken up a subscription from its members and other supporters to commission a portrait of Mrs. Hayes “as a memorial for her action in banishing wine from the White House.”17 The portrait, painted by Daniel Huntington, was accepted into the White House collection in March of 1881 by President Hayes’ successor, President James A. Garfield. An enormous crowd turned out for the unveiling ceremony, “filling all the seats and overflowing into every aisle,” according to one reporter.18 Mrs. Hayes became the first presidential wife to have her portrait painted for the White House collection, a practice that continues to this day. This tribute was particularly fitting because President and Mrs. Hayes had initiated the project of hanging portraits of every past president in the White House, commissioning several to fill in the gaps.19 With the addition of Huntington’s portrait, Mrs. Hayes solidified the decision to add portraits of first ladies to this plan.

Her temperance views shaped the White House landscape in other, less-expected ways as well. Traditionally, after a formal dinner, the president and first lady and their guests would retire for coffee and liqueurs. As an alcohol-free alternative, the Hayses instituted an evening promenade through the White House Conservatory, which helped to increase the prominence of that space.20 It also led to the most unusual presidential state service in White House history. Mrs. Hayes wanted to decorate her dessert plates with images of ferns from the conservatory, to tie the final course with the promenade that would follow it. At the suggestion of Theodore Davis, a newspaper artist, she expanded this idea to create a full dinner service decorated with plants and animals, designed by Davis. The images often related to what was served on the china — fish on the fish plates, a turkey painted on a serving platter, and more.21

While Lucy Hayes never subscribed to the more radical aspects of the temperance movement, her adherence to its basic principles still shapes her legacy as a first lady. While she wasn’t a crusader for radical reform, Mrs. Hayes did accompany her husband on visits to prisons, industrial schools, and hospitals for the mentally ill, which were significant steps toward the social activism that many modern first ladies employ today.22 As a college-educated woman and an active temperance advocate, she set an example for what the ideal of the “new woman” could look like in the White House, even if she did not fully embrace that ideal for herself. Banning alcohol from the White House, then, represented not just a personal step for Lucy Hayes, but a national step toward a more activist role for future first ladies. 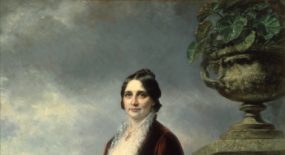